How to Host an AFL Birthday Party 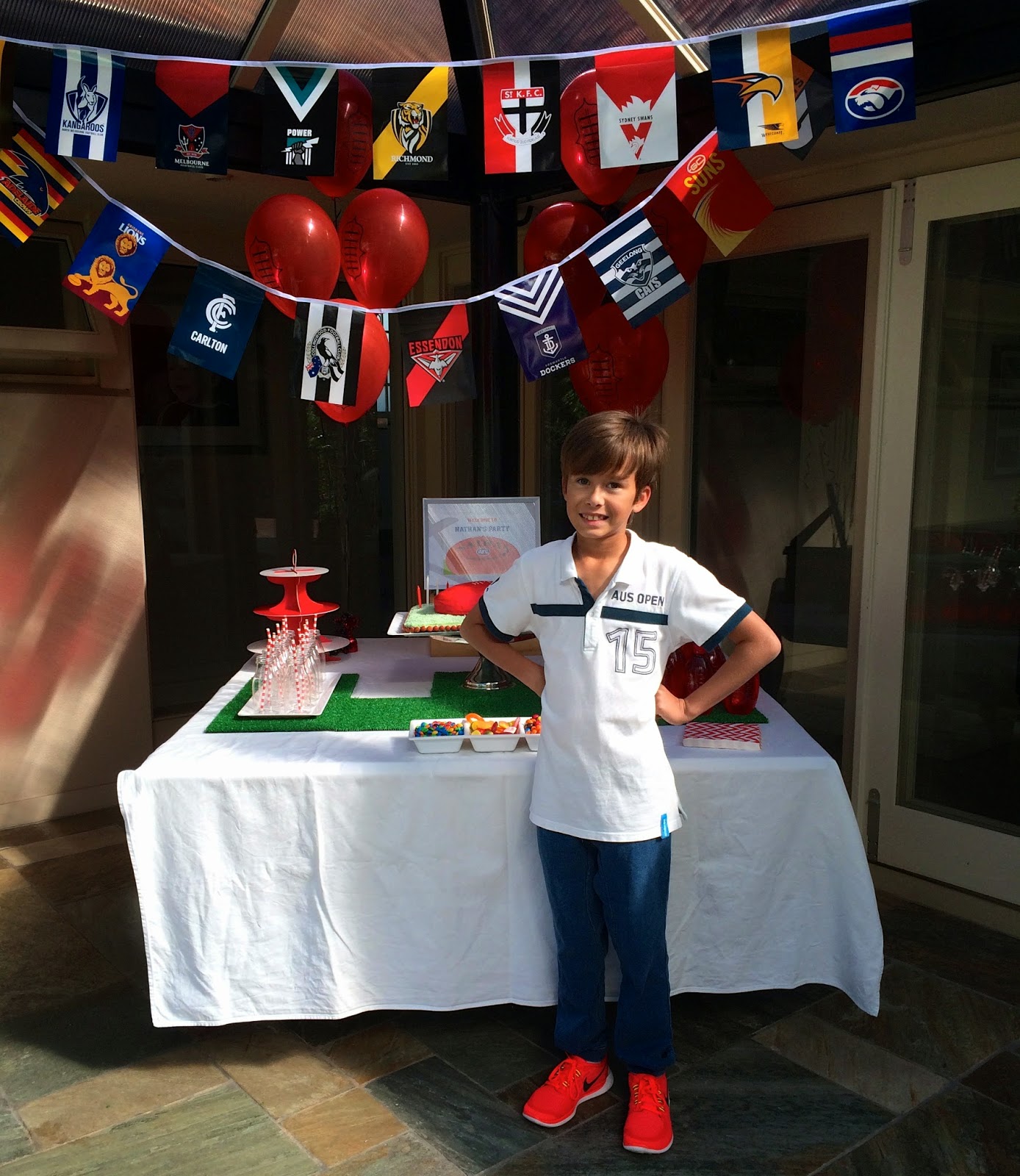 My ten year old son Nathan is not a party kinda kid. He’s very low-key and for the past 4 years has chosen to forgo his birthday party entirely and travel to Melbourne to watch his beloved Blues play instead.

With his first milestone birthday approaching, I asked if he would consider actually having a party this year. One that he could invite his friends to and really celebrate. “And so you can get some presents!” his younger brother, who LOVES PARTIES, encouraged.

“Well, ok. I guess that’s a good idea. But don’t do anything weird Mum”

I beg your pardon?

“I don’t want any games and I just want my friends to be able to wear normal clothes. Don’t make them dress up or anything stupid like that please”

Woah. Whose kid are you?? Definitely his father’s.

Now anyone who knows me is very well aware that I cannot throw a party without, at the very least, a theme and, wherever possible, a lot of fanfare. So I asked him… “What about a footy party?”

Is that a tumbleweed?

And then, finally “Yeah, that’d be alright. I guess.”

And so I began.

Now that I had a theme I had to work out the invitations. I found THE MOST fabulous ones online here at Jo Studio and the service was brilliant. Super quick turnaround and excellent communication. I had them printed and cut at Officeworks. There is a whole corresponding range of party gear to go with it but I just got the welcome sign too. 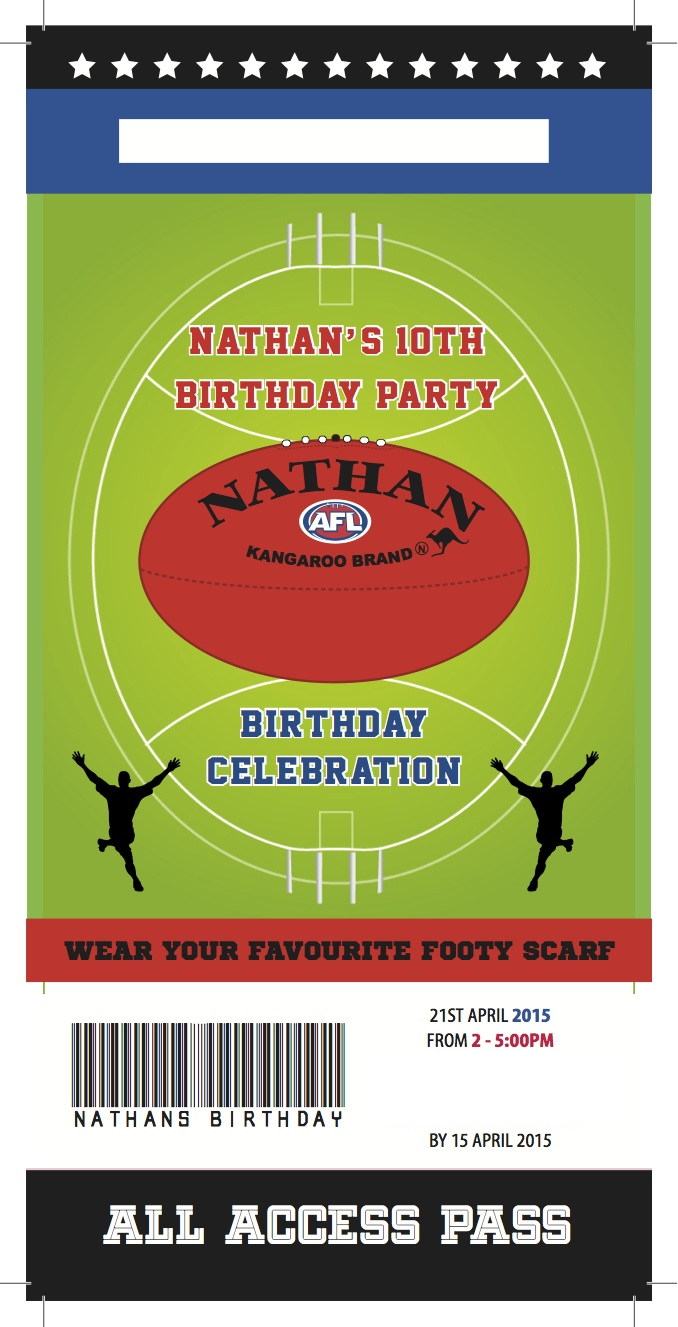 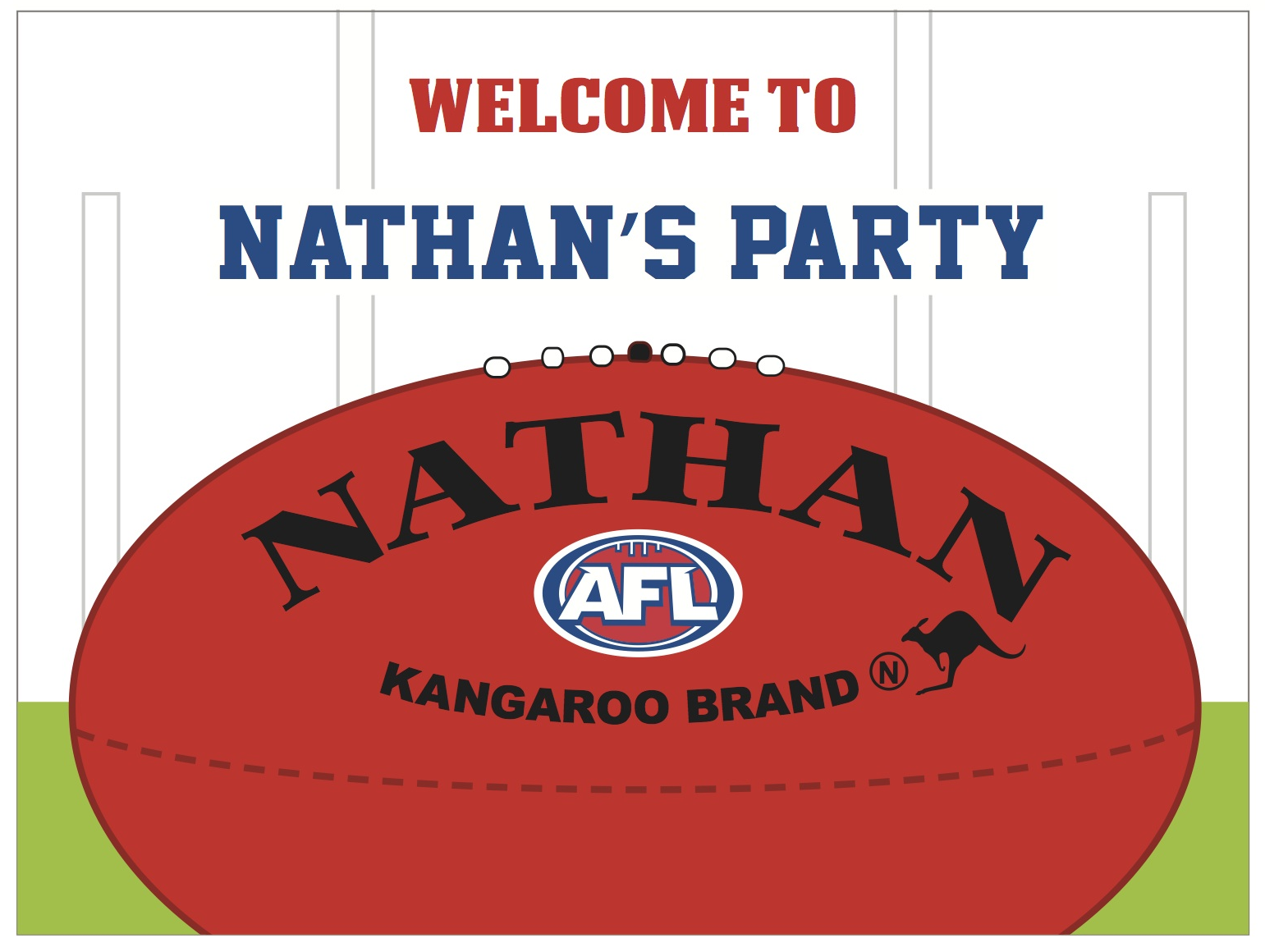 Next was the cake. I like to make my own cake for the kids. I’m not sure why that is. I haven’t analysed it but it’s just how I roll. The thing is, I’m not really THAT GOOD at making cakes so it has to be something reasonably simple and it can’t involve fondant. I haven’t given that a go yet and it scares me. So, I had this idea to make a football on a footy field. I found a local cake supplier Complete Cake Decorating Supplies who hire out cake tins for $5 as opposed to buying one new for $40 and I also grabbed some pre-coloured butter cream [GENIUS!], an icing spatula and some cool footy goal candles. Then I picked up two Betty Crocker chocolate cake mixes for the ground and two Betty Crocker vanilla cake mixes for the football and a dozen eggs [THAT’S HOW MANY IT TOOK!] 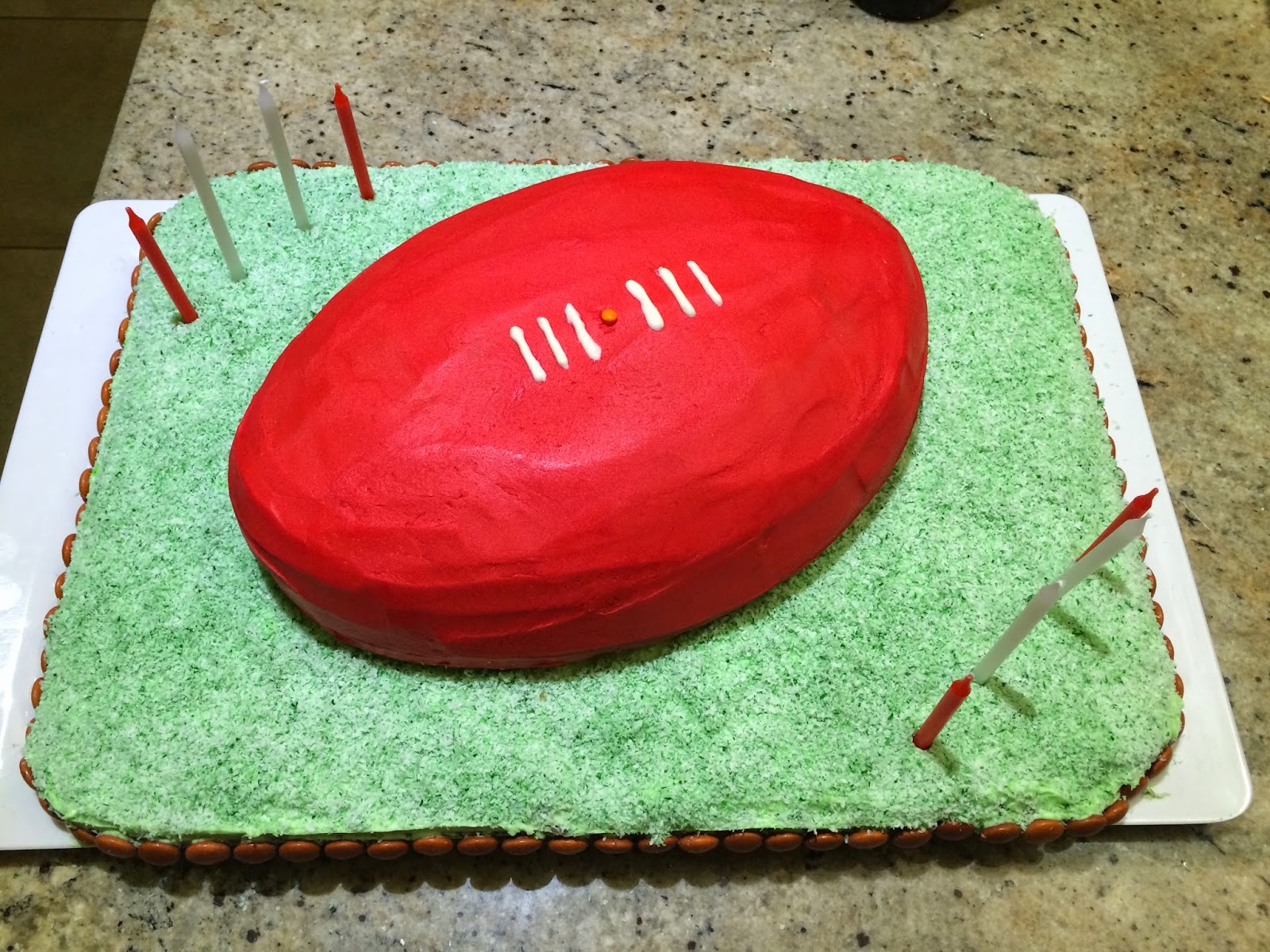 I am RAPT with the result. The cake tin was actually for an American Rugby football so I had to round off the ends but it turned out pretty well. I baked the chocolate cakes in large lamington tins and then coloured the icing with green food colouring and sprinkled green dessicated coconut on top to make it look like grass. The edges were pretty messy so I picked out all the brown Smarties in a family pack and stuck them around to clean it up a bit. 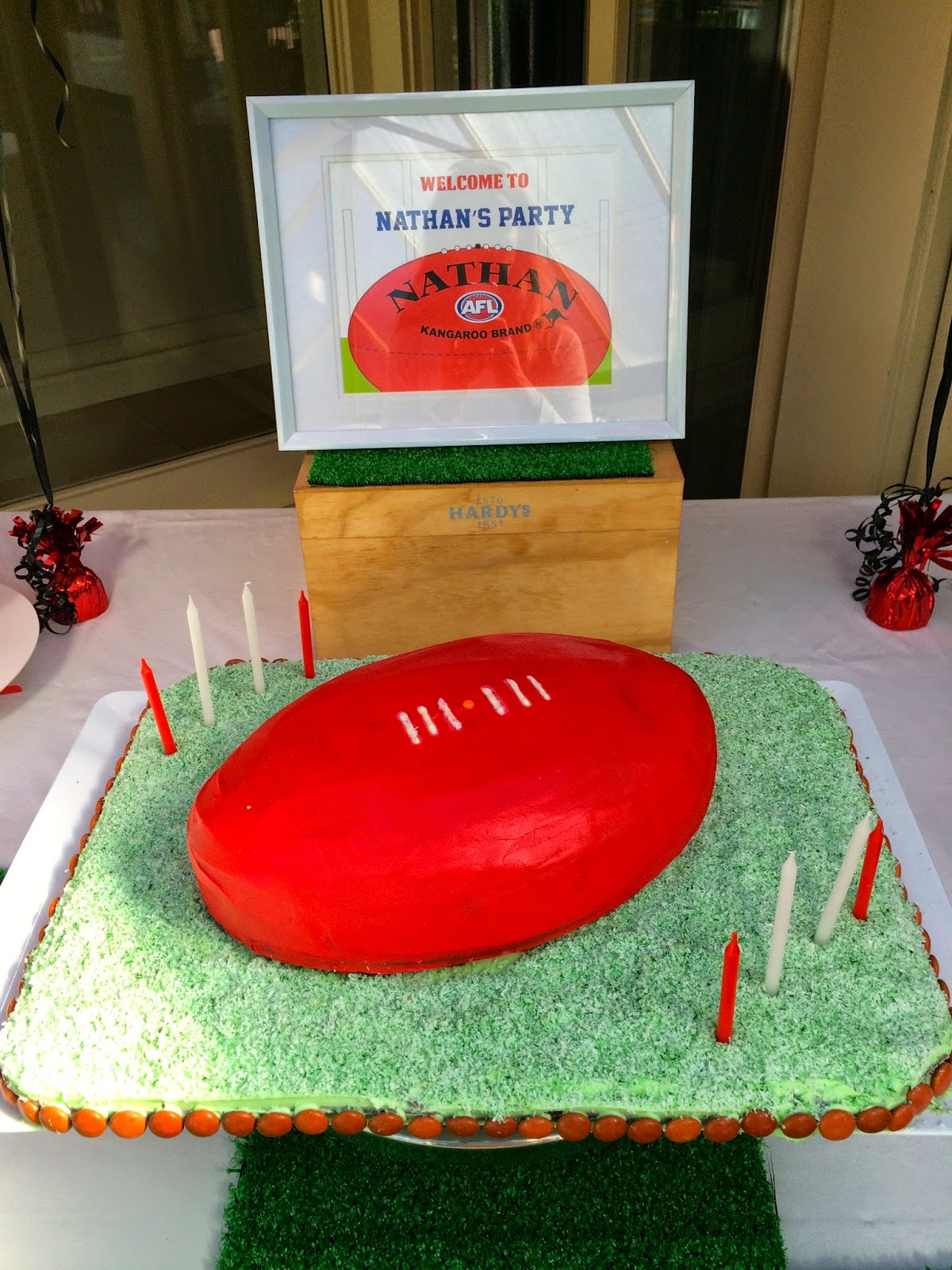 It looked so good that I made a last minute decision to bake cupcakes as well so that the kids didn’t eat it after we sang Happy Birthday! Also because the entire extended family was coming for dinner immediately after the footy party and I wanted them to see my cake too. 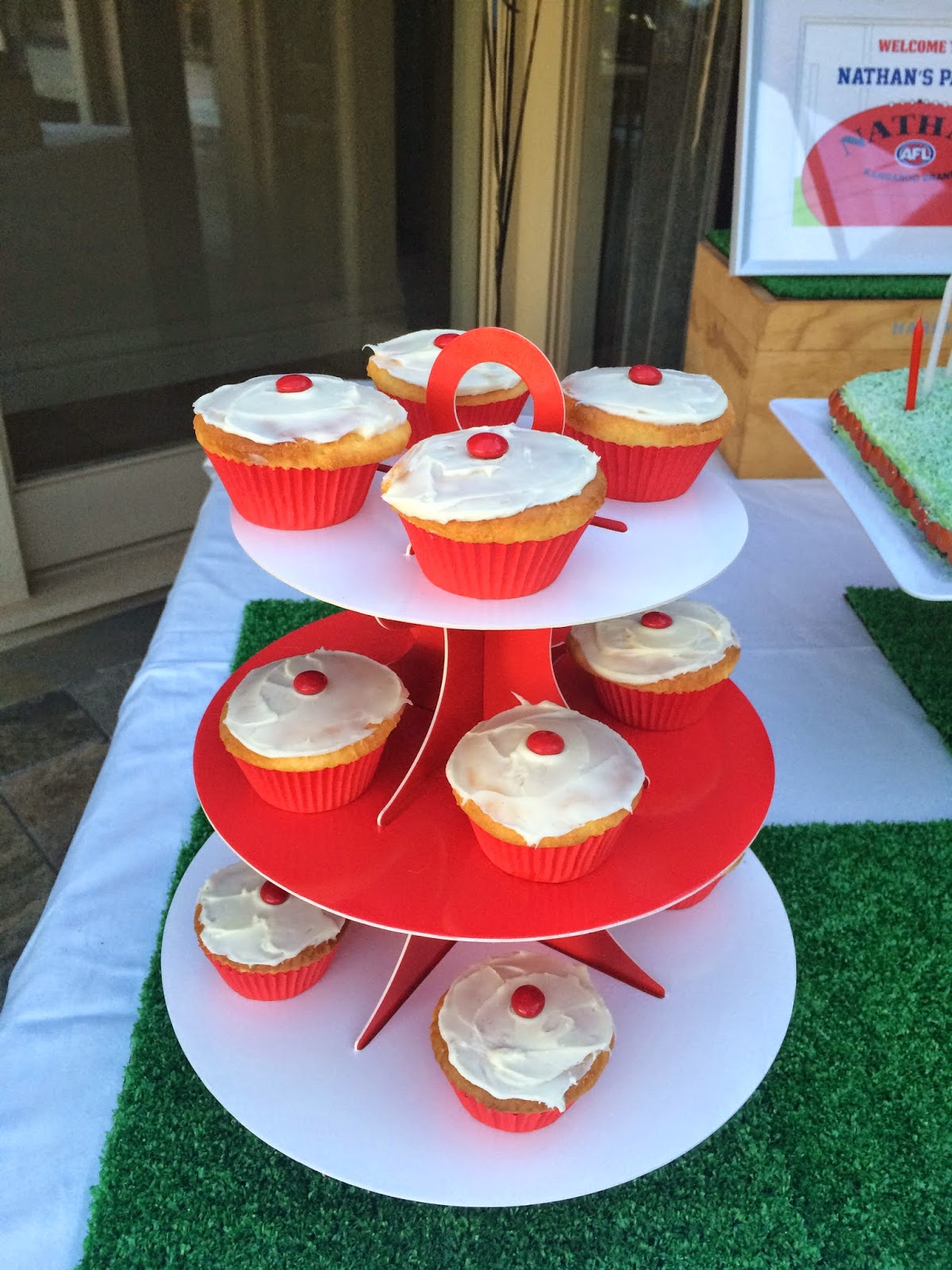 I picked up some fabulous AFL bunting online here from Lombard in Melbourne and also a packet of football balloons which I had filled with helium locally. 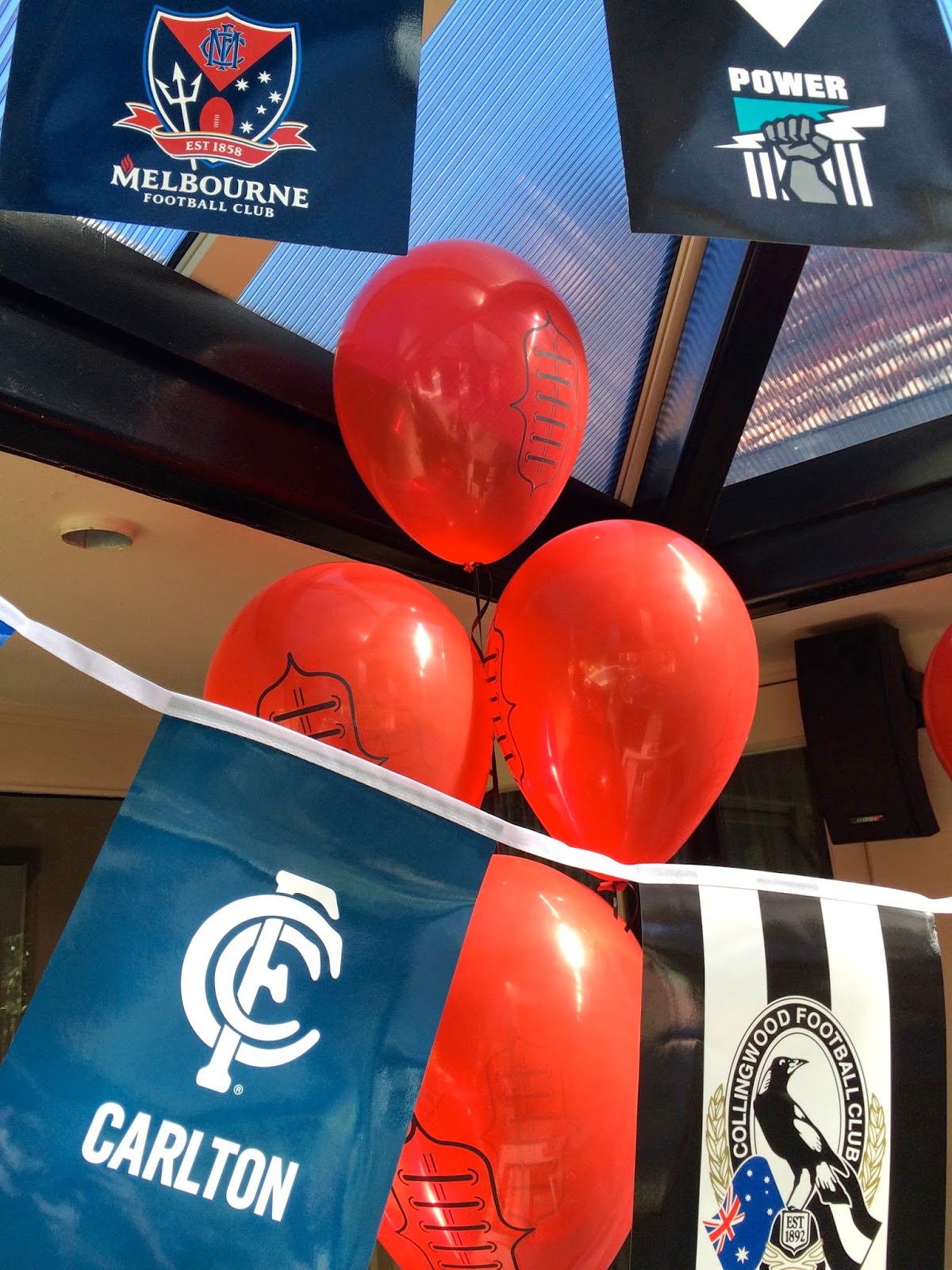 I dressed the table with fake turf and carried the red of the football throughout the whole party. 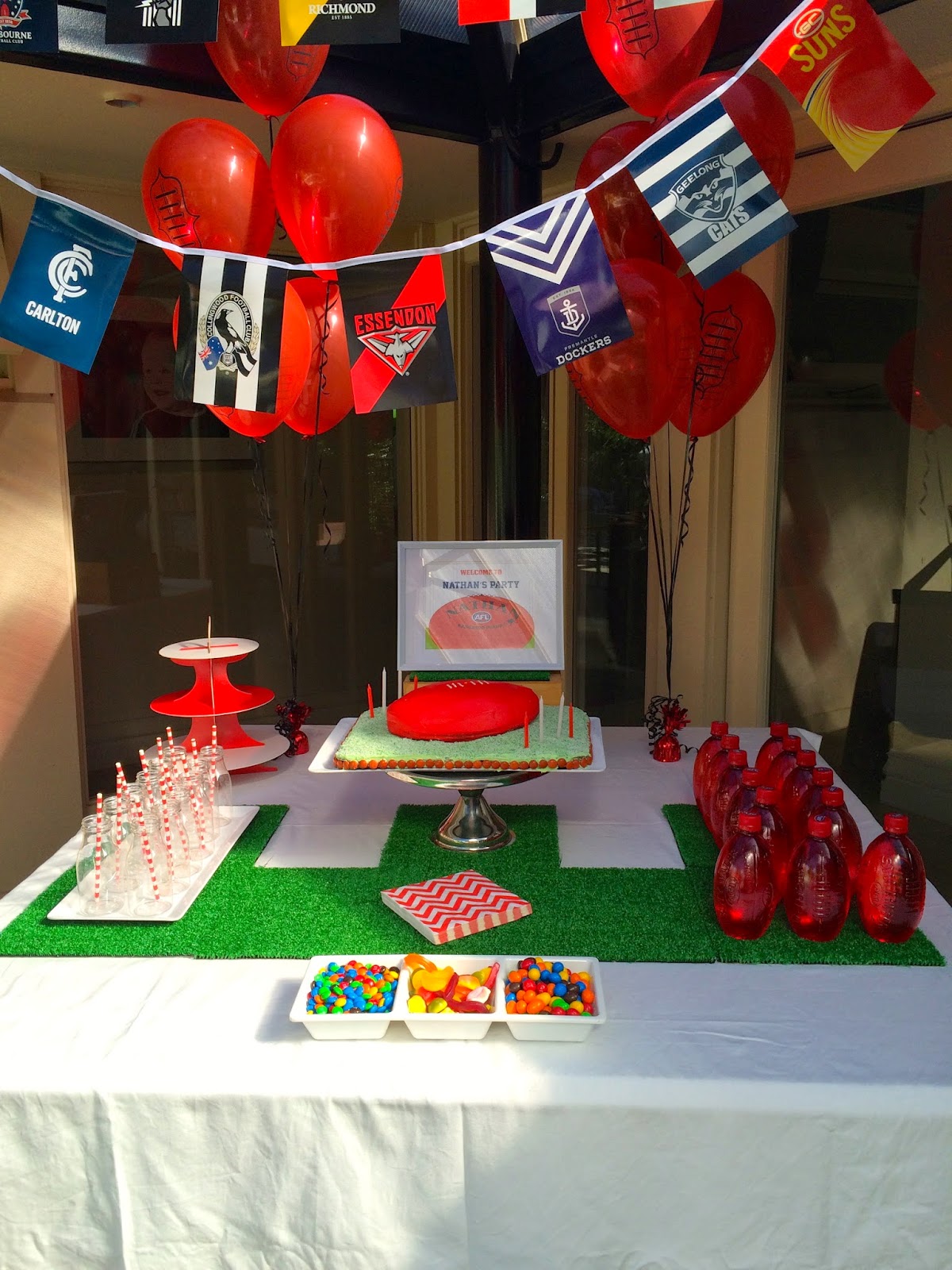 The winning purchase though was the fluke-find of the AFL Footy Water! I literally stumbled upon them a few weeks ago when I was paying for my petrol and they were just there… beside the counter. The kids LOVED them. 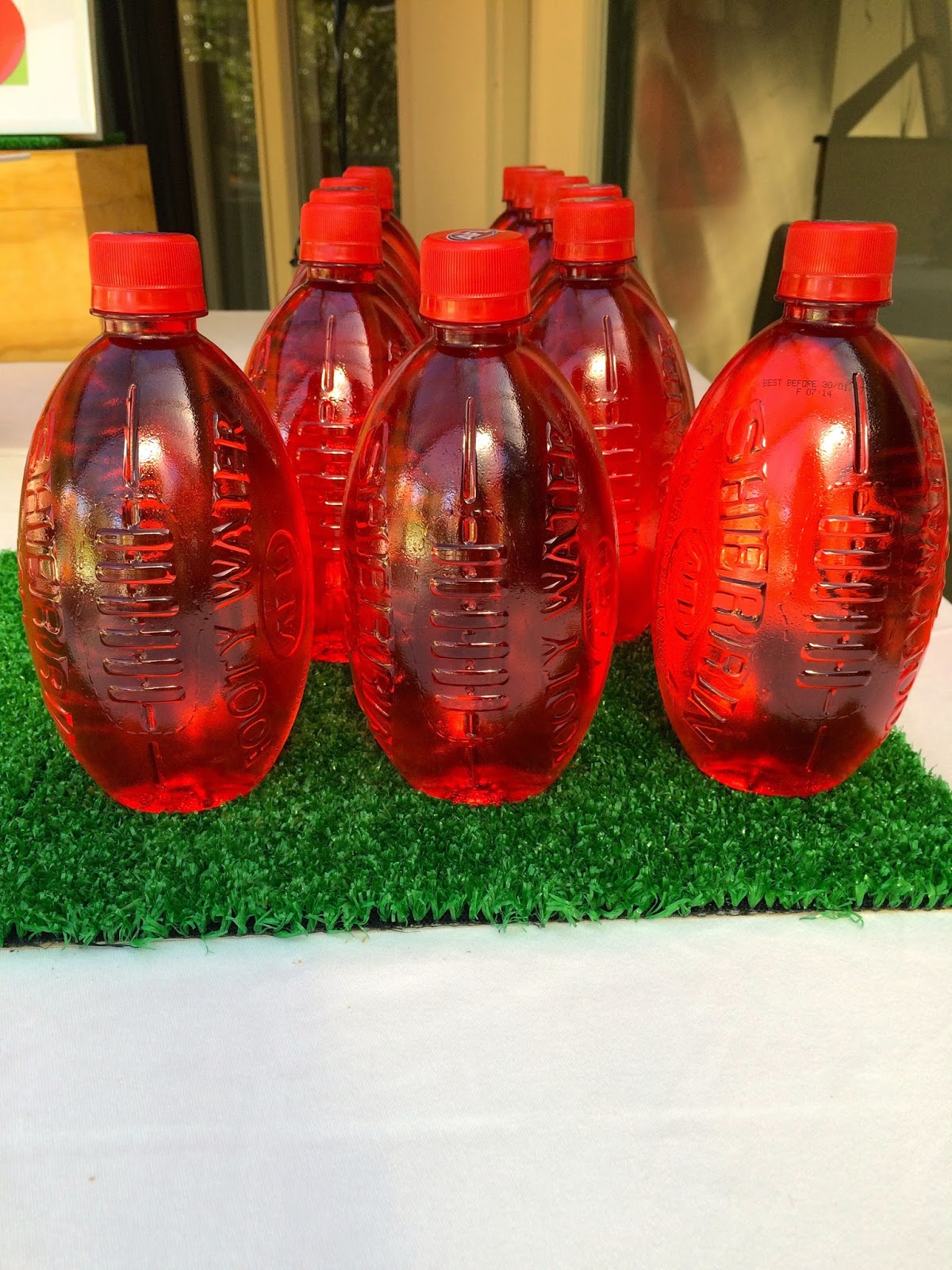 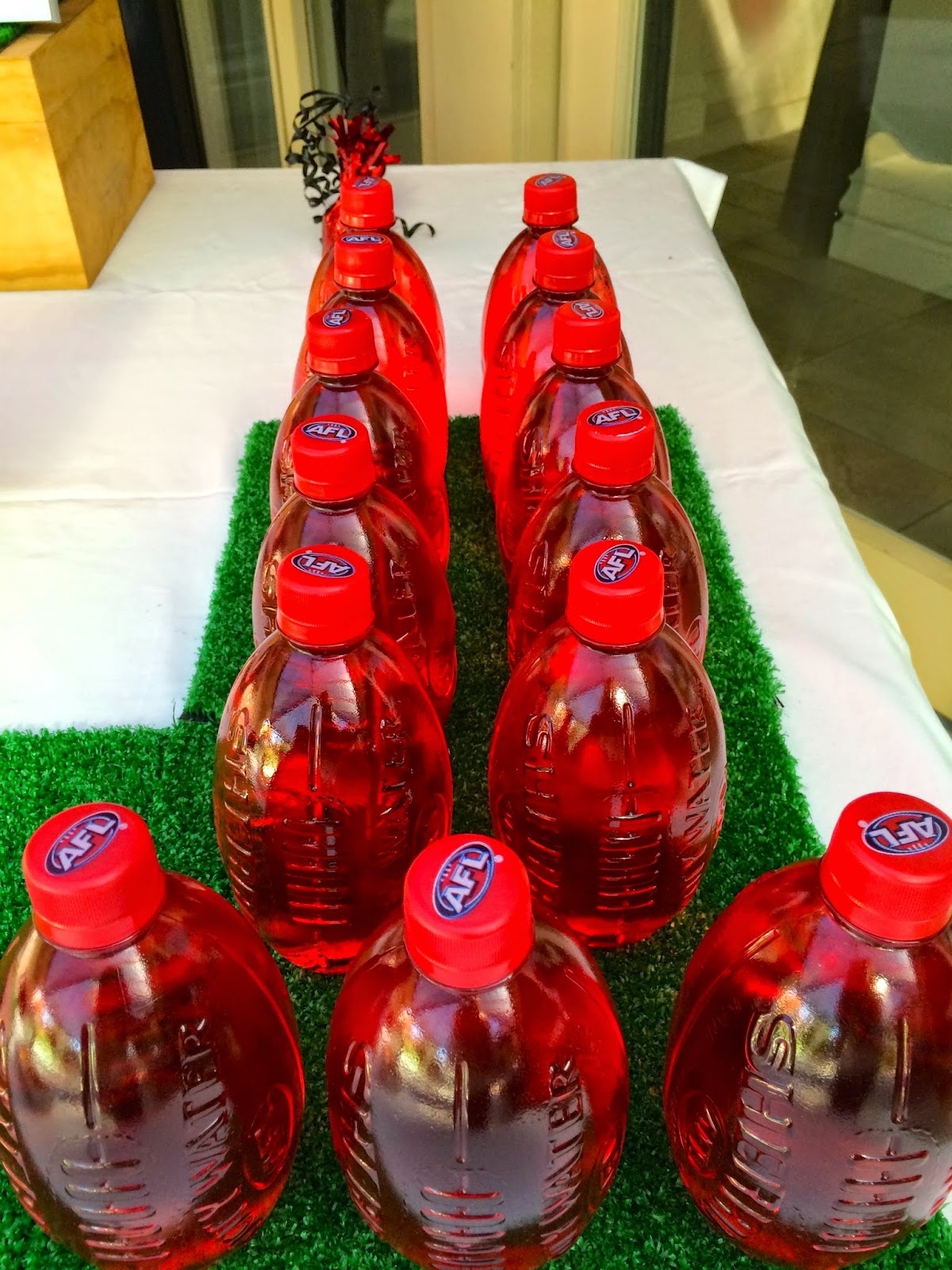 For food I decided to go full footy fare and served up mini hotdogs, meat pies and cups of hot chips [sorry no photos!] and some popcorn. The party was from 2-5pm though so it was only snacks  - no lunch. I also had some softdrink which they drank from gorgeous plastic milk bottles with themed straws. 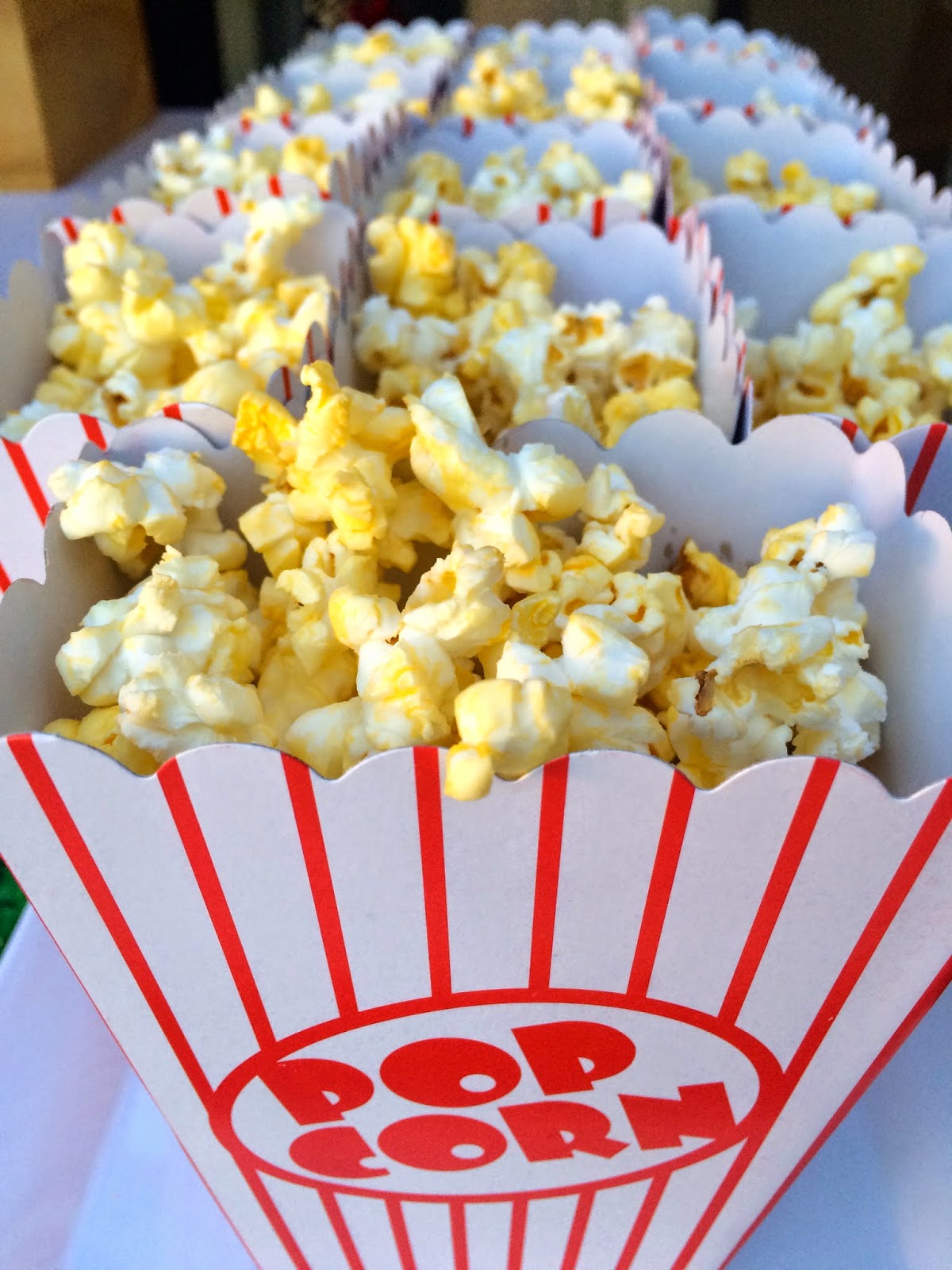 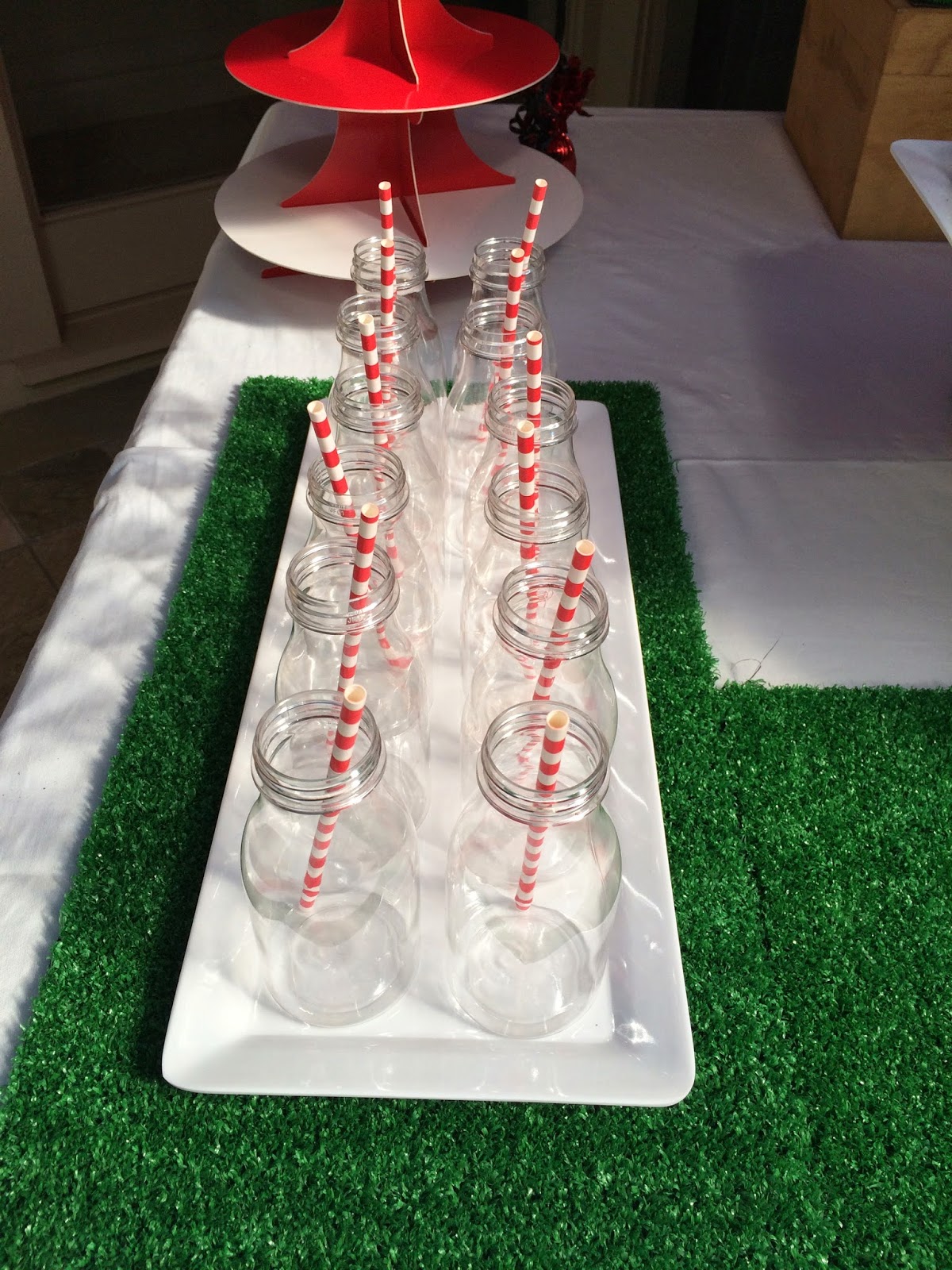 I was under strict instruction that there were to be NO organised games so instead we brought out the table tennis table, the foosball table and all the balls in the house. The kids swarmed from one activity to another and it was LOUD. Like crazy loud. But they had a ball. Pardon the pun. Half way through hubby took all of them for a walk down the street to the local oval to really run off some energy and then it was back to sing ‘Happy Birthday’ and send them on their way. 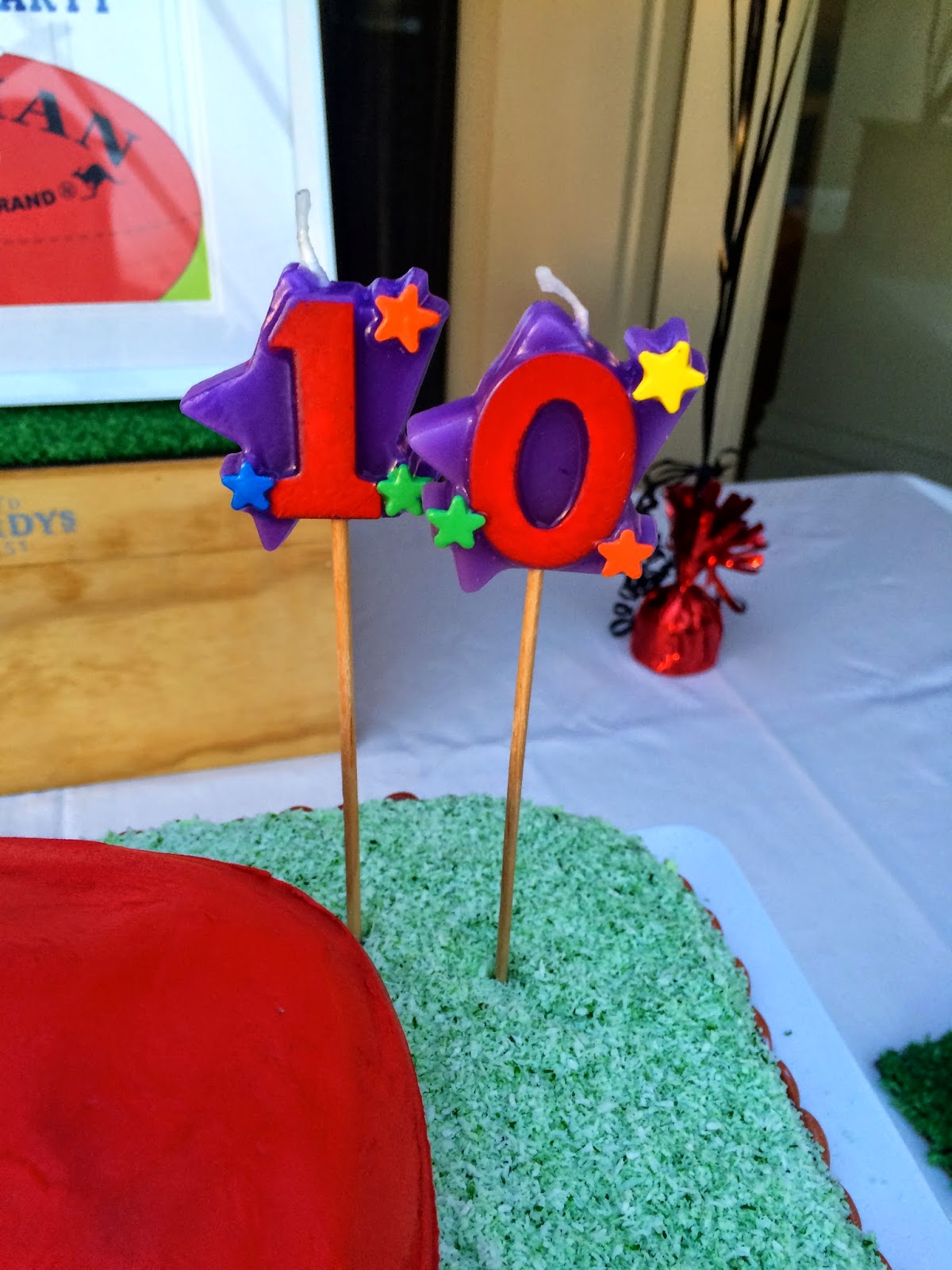 I kept the loot/lolly bags really simple and just included some lollies, a whizz fizz and a pack of footy cards into brown paper craft bags.

And then it was over.

I got rave reviews...

“Did you love it Nathan?”

“Yeah. It was pretty cool actually. Thanks Mum.”