Fakebook vs The Full Catastrophe 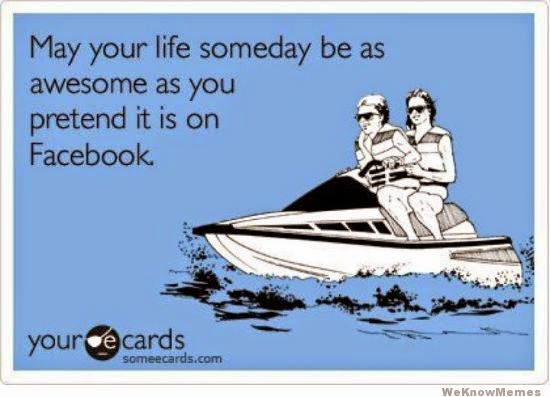 Imagine we’re friends and I’ve invited you to my place for dinner. Because I don’t want to appear fake and life-shame you somehow, the dinner table conversation plays out like this:

“Here’s some snags and some bread. We’ve run out of butter but just put some sauce on it and it should be fine. I was going to buy steak, but we had a really high electricity bill this quarter so we can’t afford it. Excuse my pjs. I’m having a shit day and couldn’t be arsed getting dressed. I know that you won’t mind though – no airs and graces for you! Just keeping it real. Isn’t your son so well behaved? I’d love for him to be able to play with my sons but they’re both in a time-out in their bedroom ‘cause they refused to pick their toys up off the lawn and are now refusing to talk because they hate their family. Oh and my husband was planning to be here but we had a fight this morning and he doesn’t really like you much anyway so he’s gone to Bunnings. Pardon? You’d like to use the toilet? Of course! But don’t sit on the seat. I haven’t had a chance to wipe the piss off.”

When you invite people over for dinner, don’t you clean the house? Don’t you wear something nice and cook something delicious? Do you serve it on a lovely, set table with some matching [or purposely mismatched] serviettes? Haven’t we always shared our ‘highlight reel’?

I’m so tired of hearing people complain about other people only ever sharing their ‘highlight reel’ on social media. What is so wrong with it and why do they care?

Seriously people. Our whole fucking life is a highlight reel. It’s called manners. And discretion. There are only a handful people that see the whole catastrophe of my family life. I have 300 friends on Facebook. I don’t bullshit to them but I also don’t tell them about every shitty part of my life. Nor would I tell someone that I hardly know if I caught up with them at a party. “So nice to see you again Tania! It’s been ages – how are things?” “Oh y’know – pretty shit. Motherhood does my head in. We don’t have enough money to do anything. My kids have got attitude. My husband is stressed all the time and I’ve put on 8 kilos in the last 12 months. But enough about me - how about you?”

I’ve shared before that I, happily, live a very ordinary life. I think that’s cool and I’m authentic in all my online antics but there’s also some stuff that’s not just mine to share. I’m married and, believe it or not, we have our challenges. But whilst I’m a chronic over-sharer, my husband is the complete antithesis. It’s not up to me to air our sometimes dirty laundry to all and sundry in an attempt to share my life ‘warts and all’.  My kids throw tantrums. I argue with my mum. My house is often in disarray which often matches my hair. Sometimes the frypan that I cooked dinner in on Monday is still sitting, dirty on the stove top on Thursday. Sometimes I cook wholesome, organic, from-scratch family meals and sometimes I wipe that dirty fry pan and whip up a sausage sizzle for dinner.

I’m normal. Just like you are. But I’m not obligated to share every ‘normal’ part of my life with everyone I’m connected to, to avoid some sort of social media misconception. I am not responsible for your feelings of guilt. Just as you [or anyone] is responsible for mine. This whole business of people feeling worse about themselves because of the ‘highlight reels’ their social media friends dare to share online drives me nuts. Would these same people be pissed off if every time they were invited to someone’s house that the kids were on their best behavior and the house was tidy and the host couple seemed to genuinely enjoy each other’s company in their new outfits? Would they leave that house believing that their host’s intention was to prove to them how much better they were at ‘life’ than their guests. Would they leave feeling shamed and offended that their hosts had dared to be so ‘fake’?

There just seems to be someone pissed off about someone else’s use of social media every fucking day. What does anybody care? If I only ever show myself looking gorgeous with my gifted and talented children while my flawless husband is off hunting and gathering when he’s not cooking the perfect bbq – who cares? Do they need to see behind the scenes? What makes people think any of that is about them? What makes people think that me showing only the awesome bits of my life is shaming their life? Maybe all us hateful fakebookers are sharing the ‘highlight reel’ as an exercise in gratitude. You know, that there are positive parts of our otherwise normal, boring, messy lives. Or maybe it just doesn’t have anything to do with anyone else at all.

You know what shits me? Breakfast updates and some trending awareness campaign that shows up a million times in my newsfeed and pictures of cats and stupid passive aggressive vague updates and any story about the Kardashians. But do I care?

Nope. I just scroll past and get on with my sometimes awesome life.

And I think that’s what we all should do.
Posted by TAN at 10:15 No comments:

What it's like to love a 9 year old boy 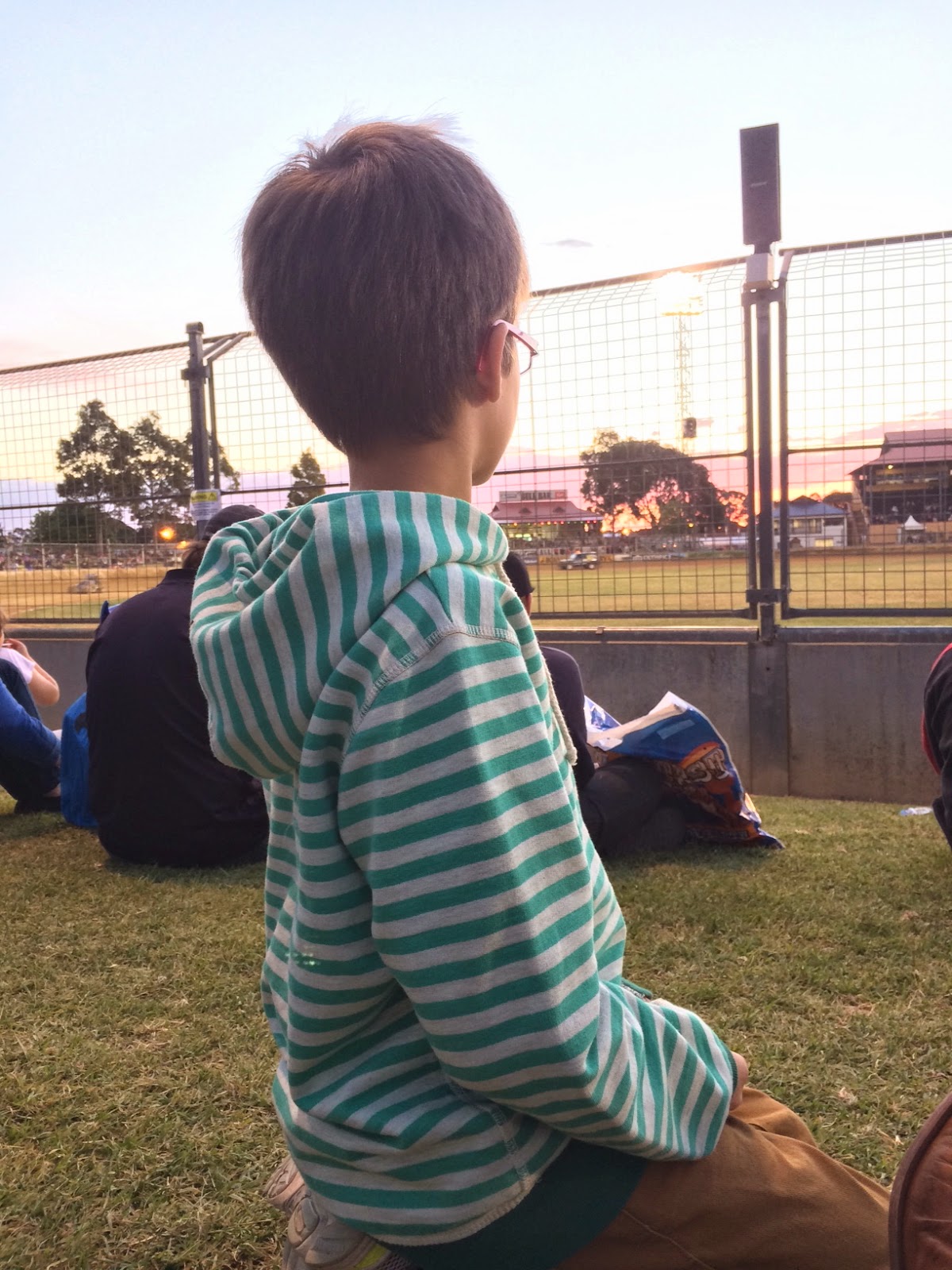 My 9 year old, Nathan, has been doing my head in lately. And by doing my head in I mean sending me batshit crazy. He has taken defiant to a whole new level and is throwing moodswings at me with the speed and agility of something that is really quick and agile. This week I was ready to sell him for a bottle of gin. But to be totally honest, I would have paid someone to take him away. This whole ‘you can’t make me, it’s my life’ attitude that has taken over his body has appeared prematurely and without warning. I have always expected it, but not so early. I’m not ready for that. I’m not prepared to enter into a relatively grown up argument with a child. And, despite his best argument, he IS a child. He hasn’t even hit double digits yet!

It’s weird watching something that you grew in your belly ‘become’. It’s even weirder to realise how little their ‘becoming’ has to do with you… and how much. He’s becoming a real person. With his own opinions and feelings and preferences. His body is changing. His voice is changing. He is growing up and out and most importantly, within.

This week was his junior school drama production. Two year two classes and two year four classes all performed one act per class. Nathan’s class had the fourth act. The three acts preceding it were excruciating. Not to say that the kids weren’t all awesome and cute and talented and funny. It’s just that I’m tired and grumpy and really couldn’t give a shit about anyone else’s kid [and just for the record, I know and love some of those kids but would still rather be home in my tracksuit drinking wine].

When the curtain rose on Act 4, I waited begrudgingly for my kid to do his thing, quickly, so we could get out of there. And then he walked out on stage and my heart skipped a little bit and my smile spread so wide that my face almost turned inside out. That was my boy. On stage. In the spotlight. With a gorgeous, strong and loud voice he delivered his lines flawlessly. I could sense his entire essence from my seat in the dark. I could see his confidence like an aura and fuck that made me proud. This was the same boy who was TERRIFIED of even the thought of performing only two years before. I watched him. And I saw him. When you love a 9 year old boy, it’s not often that you have the opportunity to just sit and watch. They’re always moving or scowling or catching you spying on them. But last night, I surrendered to the good fortune of my son performing. I have no idea what his act was about and I don’t know what anyone else was doing because I just could not take my eyes off him. I watched the way his body moved and his head tilted when he was listening. I watched his face light up like sunshine when he laughed. He was beautiful. He IS beautiful.

Loving a 9 year old boy is not always easy to do. It means there are times that he seems to have no interest whatsoever in anything that comes out of your mouth unless it involves football or Pokemon cards. There are times that he will have three helpings of dinner, gulped down without any regard for table manners and a week later a declaration that he HATES that exact same dish and he can’t believe he is expected to eat it. It means he no longer comes to the ladies toilets with me and fiddles with the stereo knobs from the front passenger seat in my car. It’s a time of slamming doors and lots of rolling eyes. My days are unpredictable with my 9 year old. Some days he is entirely full of boyish love for me and happy to cuddle up next to me on the couch for hours and other days it’s almost like he wishes everyone, including me, would just disappear. There’s a lot of bashing up the younger brother and passionate refusal to do the simplest and most regular of things. Like showering and brushing teeth. And the attitude. Oh my lord, what is with the attitude?! That’s not what I was pitching for when I was gently shaping my toddler. I’m all for my kids having their own mind, I just wish it was more like mine y’know?

So, sure it’s not easy but man it’s rewarding. Watching him from the dark of the audience while he was on stage was sublime. In one of the scenes, all the boys had to dance/walk on stage to Michael Jackson’s ‘The Way You Make Me Feel’. And there was mine, entering stage left. All rhythm and swagger. Following the choreography with perfect timing, singing along word for word. I was fixated on his facial expressions and the way he held himself tall and proud. I was in awe of him. Up there, on stage, completely independent of me. I watched him confidently cross the stage at the end of the performance to hand out the gifts to the volunteers and shake their hands. He didn’t tell me about that. He doesn’t tell me lots of things these days. I sat there and understood that I’m just not so necessary to his everything anymore. My boy is on his way to becoming a man and his mum is on her way to becoming obsolete. Once he looked to me for all the answers. Now it seems that he's always looking away. Into the world. I don’t expect the ride to be easy but nothing worthwhile ever is.