Did I let that girl down? 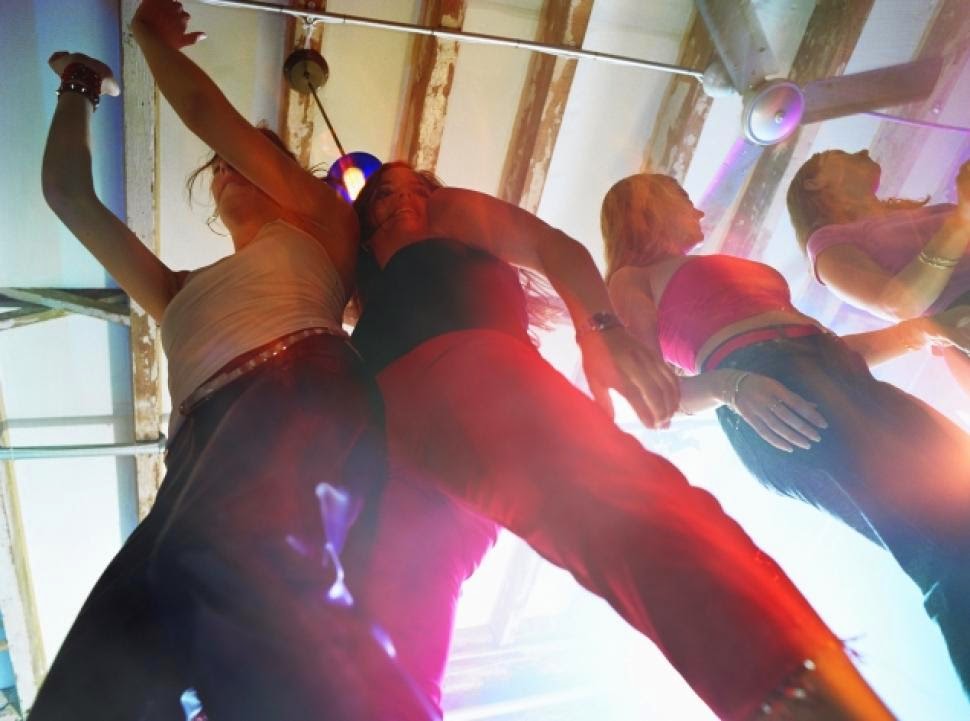 Some time last Friday night I became middle-aged. One minute I was standing at the bar in my leopard print pants dancing to Blurred Lines like the 30 year old I think I am and the next minute I was a 42 year old mum.

I know exactly when it happened too. It wasn’t when I had to come inside because it was freezing in the courtyard and despite my sensible outfits layers, I needed to stand in front of the open fire. It wasn’t when I realized that all the guys that caught my eye [in a harmless, non-cheating kind of way] were beardless, looked a bit tired and all had grey hair. It wasn’t even when I ordered a gin and tonic because I understood that if I had another glass of pinot gris, I would feel queasy and not be able to sleep well and I knew I had to be up early in the morning. It was precisely at the moment that I watched a young woman gyrating between two equally young men in a very tight, very troubling kind of human sandwich.

I had been watching this girl [I know technically she’s a woman but I’m middle-aged now and that makes her a girl] randomly throughout the night. She was young. Maybe early to mid twenties. Blonde and fresh and confidently attractive. She was dancing around with a group, I couldn’t tell who exactly she was with but there were at least two other girls that I think she was with. She was having a lot of fun and I had been watching her with a mix of admiration and envy. Admiration at her ability to dance –vigorously – without spilling her drink and envy as I remembered that feeling of abandon that overcomes you when you’re young and out and feeling gorgeous. She was wearing a short playsuit with stiletto heels and a deep, plunging, ruffled neckline. She looked gorgeous. She was drinking but I couldn’t tell how drunk she was. I know this is all sounding weird and you’d be forgiven for wondering if I’m actually some sick kind of stalker but I’m going somewhere with this.

I watched her dancing up against one of the guys in a suit who did his best to keep up with her funk… and failed. Still he pulled her closer and as she spun around and backed up to him it was obvious that she wasn’t wearing a bra as her top gaped and showed just a bit too much to the gathering onlookers from time to time. Still, her hands were in the air and she was smiling and singing and it looked like she was feeling fantastic. I stole kind glances at her in between having my own good time with a great group of chicks and then I noticed that another guy had started dancing with them and that she was now sandwiched between the two. And it was tight in there. The boys could’ve kissed each other when she squatted between them and shimmied her way back up. Her eyes were closed and she looked like she was really happy to be there. With them. Like that. I watched on as another mate took photos or video on his phone of them dancing. I watched on as both the guys she was dancing with had their hands on her. Competing for space on her small torso. I watched on as her girlfriends clapped with encouragement and as she turned it up when they did. I watched on.

I can’t reconcile how it all made me feel and I am still confused. The young, empowered woman in me wanted to high-five her and say ‘You go girl! While you’re young and happy and without the burden of responsibility. Feel gorgeous. Be sexy. Flirt to heart’s content’. The middle-aged, protector in me wanted to march over, eye-ball the guys, erase the phone footage and tell her ‘You go girl! But remember that the minute you want to stop – I’m here, and I’ve got your back’

There was nothing wrong with her behavior and I sincerely HOPE this is not being misinterpreted as judgemental but it just made me feel so uncomfortable. Maybe she didn’t want to stop. Maybe she wasn’t drunk. Maybe it was playing out exactly how she wanted to. Maybe her own friends had her back. Maybe all those guys were her friends and this was just how they all partied together. Maybe. But maybe not.

I left not long after [it was already 11 o'clock!!!] so I don't know how the night ended for her. I hope it was exactly as she intended. And, regardless of what that may have been, that she still felt that way in the morning.

I remember being young and single and gorgeous and drunk. I remember dancing on packed dance floors. Hot and sweaty and sexy. Pushing myself up against guys and feeling their ‘appreciation’ at doing so. It’s a heady time and I loved it. Did I think I was doing anything wrong? No. Would I have appreciated some old bag keeping their watchful eye on me? Fuck no. Weirdo. So why can’t I shake the feeling that I somehow, just a little bit, let that girl down?